Bioarchaeology of Huari posters and abstracts

MADELUNG’S DEFORMITY AND POSSIBLE DYSCHONDROSTEOSIS: TWO CASES FROM ONE TOMB AT THE LATE INTERMEDIATE PERIOD SITE OF MARCAJIRCA, DEPARTMENT OF ANCASH, PERU.

Madelung’s deformity of the wrist is an uncommon growth disturbance affecting the ulnar side of the distal radial epiphysis. Usually bilateral, characteristics include an ulnar tilt of the epiphysis creating a v-shaped articulation for the carpus, a dorsal and radial curvature of the radial shaft, an overall shortening of the radius, and a posteriorly dislocated distal ulna. Predominantly seen in females, the disorder can occur in both sexes, but is usually more severely expressed in females. While Madelung’s deformity can be isolated in its occurrence, co-occurrence with shortened tibiae relative to the femora may suggest dyschondrosteosis (Léri-Weill syndrome), a type of dwarfism characterized by mesomelic shortening.

Chullpa 26, one of 35 Late Intermediate Period (ca. AD 1250) comingled tombs at the highland site of Marcajirca, Peru yielded four radii and two ulnae that demonstrate morphologies consistent with Madelung’s deformity. The six bones represent the bilateral congenital occurrence of the defect in two adults. The severity of the defect differs between the two pairs, and considering size and robusticity, it is likely that the difference reflects female and male expression of the condition. This deformity was not observed among the other examined adult radii (n=197) and ulnae (n=186) that were excavated from this and five other tombs (adult MNI=103). Three comparatively short tibiae were also recovered from Chullpa 26, which may suggest that these are cases of dyschondrosteosis. In addition to being rarely reported in paleopathology, these cases offer insight into the use of Late Intermediate Period chullpas in Ancash.

Related to handedness, bilateral asymmetry in the human skeleton is associated with differential mechanical loading. While this topic has received much attention, comparatively little research has examined the asymmetry of the sacrum. The present study investigates the asymmetry of sacral facets among 43 comingled sacra excavated from the Late Intermediate Period highland site of Marcajirca, Ancash, Peru (ca. AD 1250), of which 40 exhibited asymmetric facet angles. Related to movement of the back, sacral facet angles permit flexion, extension, and lateral flexion, but they limit rotational movement. As previous studies have found that right-handed individuals tend to demonstrate left lower limb dominance, it was predicted that the angle of the left sacral facet would be more obtuse than that of the right, reflecting asymmetrical rotational movement. An original method was used to measure the right and left facet angles, and bilateral asymmetry was assessed with the formula: [(left side-right side)/right side] * 100. Forty sacra (93%) demonstrate asymmetric sacral angles. While 53.49% of the left facet angles are more obtuse than the right, this asymmetry was not statistically significant. The results suggest that while sacral facet angles hold potential for asymmetry studies, future research should consider potential confounds such as age, sex, as well as individual behavior.


This study explored taphonomic factors that contribute to the preservation of human skeletal remains from chullpas, the above ground tombs used in some ancient Andean populations. This study examines chullpa burials from the Late Intermediate Period (1200-1532 AD) site of Marcajirca in Peru, where burials had been disturbed, with commingling. This study incorporates approximately forty samples from the first hand-drawn map layer of bones of three different chullpas. Layers inside each chullpa, which were drawn and analyzed by Geographic Information System(GIS), the process of visualizing and understand patterns. Remains were examined for three taphonomic factors: weathering stages, plant pigmentation, and root presence. GIS was utilized to identify taphonomic patterns in chullpas to study the effect taphonomy has on the preservation of remains. It was hypothesized that each chullpa would show similar taphonomic frequencies because preservation of the similar mortuary pattern would lead to similar taphonomic processes. Among 35-40 bone samples analyzed from each chullpa, plant pigment was more prevalent in one chullpa with 68% of pigment present versus 16% and 7% in the other two. This was also the case with 12% presence for root occurrence in one chullpa versus 41% and 59 % in the other two. Weathering was scored 0-5, 5 being most severe. The most prevalent was stage 3, 40% and 46% being the most prevalent in two and the other with 20%. Comparisons from each chullpa indicate that the frequencies are not similar. GIS will help researchers document taphonomy on human remains in a faster,simpler way. 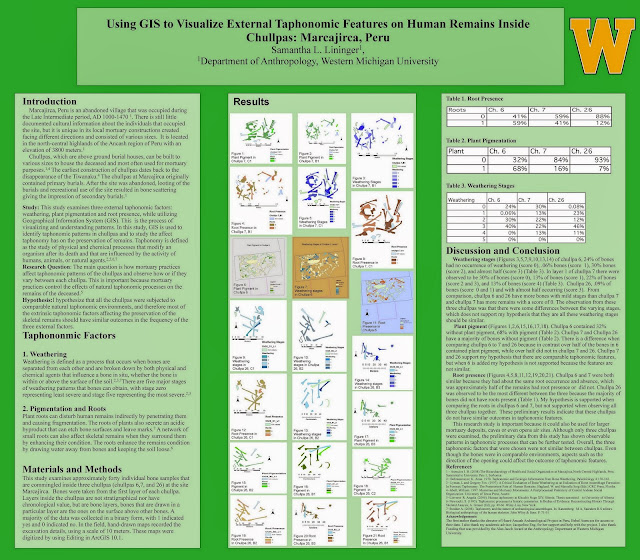 
CHALLENGES OF TERRAIN AND HUMAN INTERACTION: FRACTURE PATTERNS FROM A LATE INTERMEDIATE HIGHLAND SAMPLE FROM MARCAJIRCA, DEPARTMENT OF ANCASH, PERU.

The distribution and pattern of fractures was examined among the disarticulated human skeletal remains of at least 90 adult individuals excavated from 4 chullpas (tombs) at the Late Intermediate (AD 1040-1640) site of Marcajirca, Department of Ancash, Peru. At an elevation of 3800 m, the site is situated on the top of a steep-sided, rocky mountain slope, and it was predicted that fractures would be typical of falling injuries. Results show that long bone fracture frequency was low (1.4%), with injuries being slightly more common among upper limb bones (1.8%) than the lower limb (1.2%) and shoulder girdle (1.3%). The radius was the most commonly fractured long bone (3%) followed by the tibia (2.5%). In contrast, of 24 adult crania, 11 demonstrated fractures (45.8%), with the frontal bone being most frequently affected, followed by the nasal and parietal bones. While the majority of healed postcranial trauma does appear to be related to the challenging physical environment, both healed and unhealed craniofacial trauma suggests the presence of interpersonal violence. The possibility for aggression may explain the precarious location of Marcajirca and the positioning of walls on the lateral borders of the site. 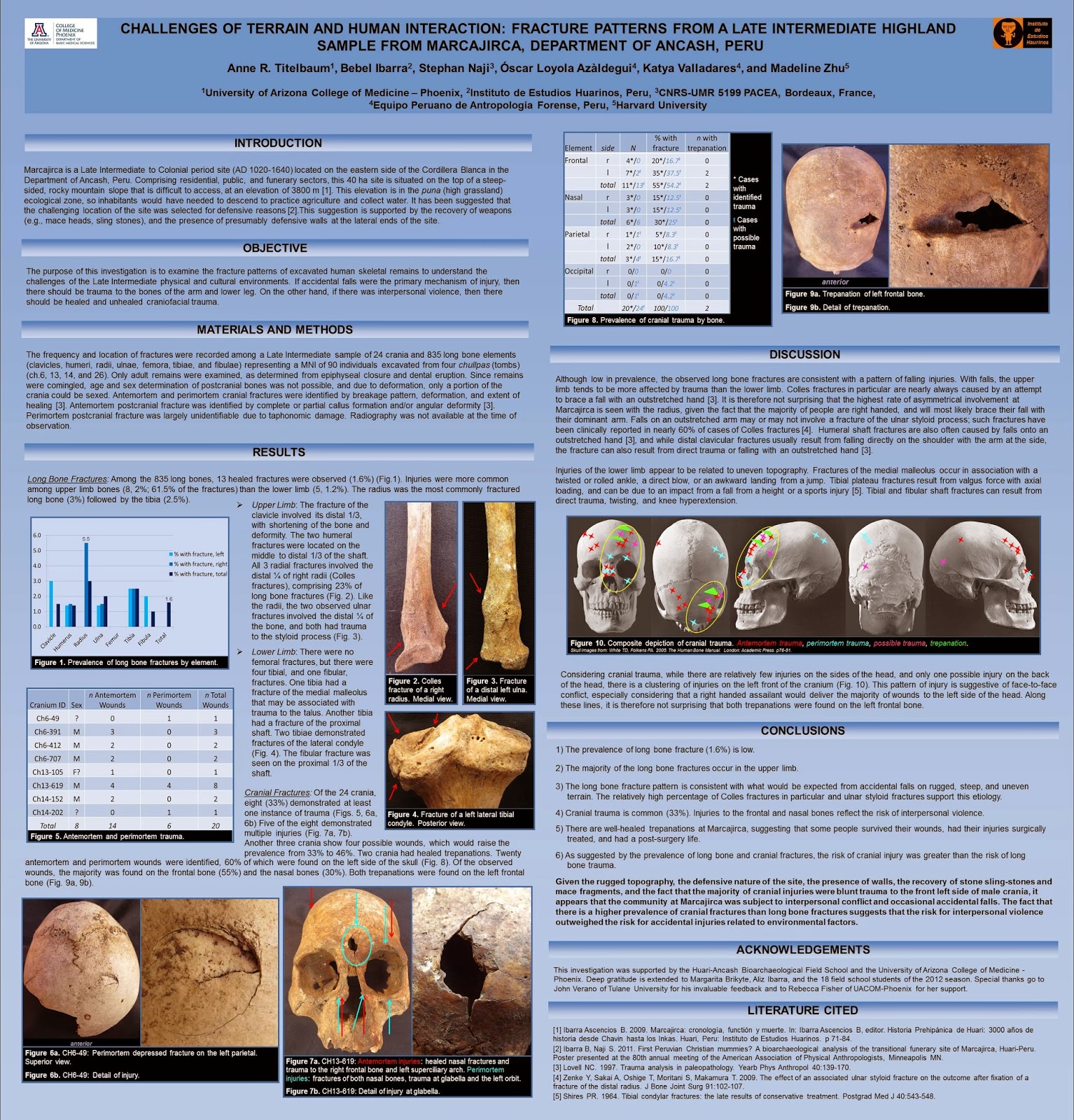 
Marcajirca is a prehispanic site with a long occupation which lasted between 1040 – 1640 A.D. and with very significant funerary traditions. It is located around 600 km northeast of Lima, Peru’s capital in the state of Ancash. The site is being explored since 2007 as a part of bio-archaeological field school.

On-going excavations indicate that mortuary rites were traditionally implemented according to local rituals. Mummified bodies tied with ropes in fetal position and wrapped in blankets (bundles) were placed in either caves or burial houses (chullpas).

In accordance with historic documents or chronicles from XVI century, when the Extirpation of Idolatries was imposed, all the Indian population had to adopt Christian customs for burying their dead, that meant burying only in cemetery areas assigned by the conquerors and with Christian symbols. These customs were in contradiction with the millenarian tradition of old Peruvians who used to bury their dead in caves or tombs where they could visit the dead afterwards in order to perform rituals and offerings for them. Old custom burials took place in archaeological places. Thus, in the beginning of the colonial times, the new tradition forced old Peruvians to bury their dead not in caves or tombs but rather underground making it more difficult for the Spanish officials to discover the burials.

Initial assessment by local archaeologists concluded that these pits were ossuaries. However 14C dating of the bones placed both pits in the timing around the arrival of Christians (1480- 1640 AD). In addition, contextual analysis following bio-archaeological excavation procedures revealed that the bones were in fact individual mummies sequentially buried in the earth.

The pits are so far interpreted as local adaptation (hidden?) to Christian inhumation rites. Despite local ancestral prohibition of body inhumation, local “priests” managed to adapt their rituals in order to satisfy Christian standards of burial and retain the tradition of custom body treatment.

Despite regular looting of the mummies and disruptions of the site by local farmers, careful excavations by field anthropologists and contextual approach of the burials is strongly warranted to guarantee proper interpretation of the burial practices. 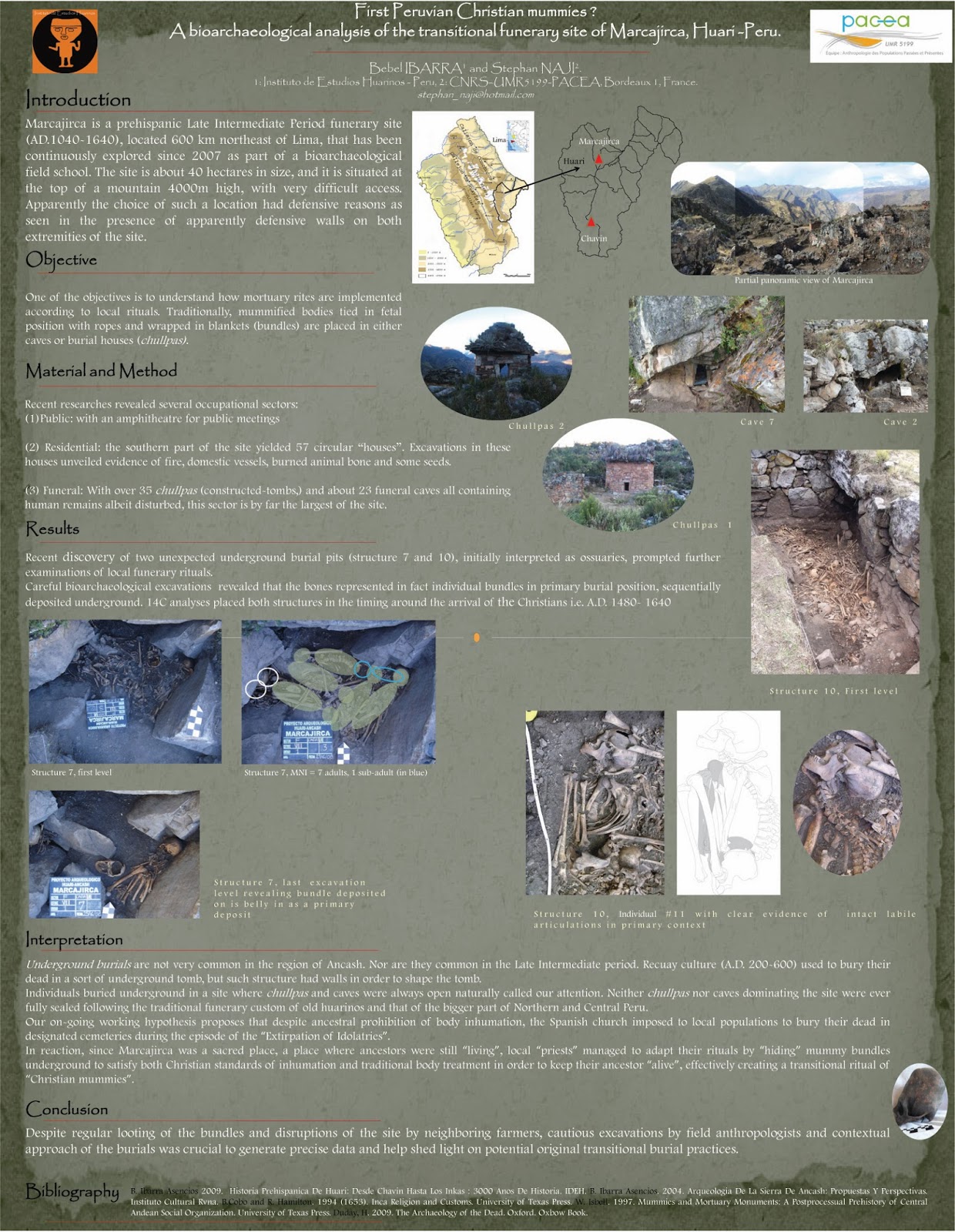 Studies of large collections of trepanned skulls from the central and southern highlands of Peru have demonstrated that trepanation was a common method of treating skull fractures in some prehispanic Andean cultures. Similar data have emerged more recently from the Chachapoyas region of northern Peru. An important geographic region lying between Chachapoyas and the central highlands, is the Callejón de Conchucos and this is evident because the Royal Inka road passes through the area. While this region has been the focus of extensive archaeological investigation, there has been only limited bioarchaeological research until recently. In this paper we present preliminary results of bioarchaeological investigations now being conducted at the site of Marcajirca, a large mortuary complex located at 3800 meters on the eastern side of the Cordillera Blanca. Numerous chullpas (funerary structures) and burial caves dating from the Late Intermediate Period through the Early Colonial Period (c. AD 1000-1600) are found throughout the site. A large sample of human skeletal material has been recovered, and is currently being analyzed from various perspectives. In this paper we present the preliminary results of a study of skull fracture and trepanation at Marcajirca, based on the analysis of seventeen crania with fractures and seven crania with trepanations. We present data on fracture frequency, location and healing, and examples of trepanations associated with skull fracture. 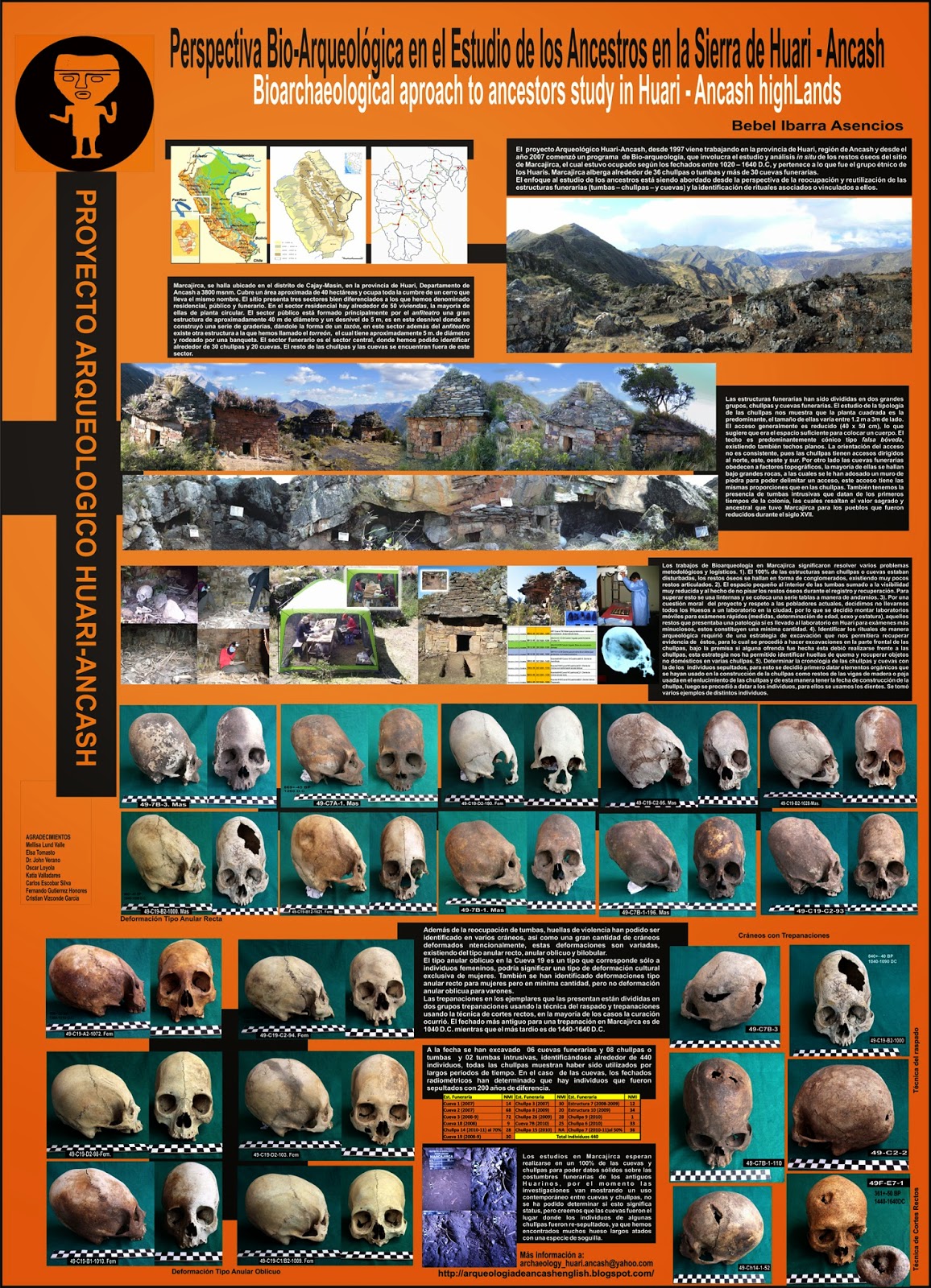 Chullpas and caves are mortuary contexts frequently used in the north-central highlands of Peru during the Late Intermediate Period (LIP) (AD 1000-1476). One interpretation of their function has been that specific structures were utilized by kin groups or individuals with a shared ethnic identity. The tradition of ancestor veneration documented in Andean cultures and supported by archaeological evidence tends to support this interpretation. The Project Arqueologico Huari- Ancash  tests the hypothesis that assemblages from separate chullpas and caves represent individuals of common ancestry.
Craniometric data was gathered during the summer of 2008 from skeletal remains during a pilot project at the Marcajirca site in the Huari Province of Peru. Individuals were sampled from two chullpas and three caves dating to the LIP. Only adults with no evidence of cranial modification were included in this study. A multivariate distance analysis was employed to assess possible biological affinity between individuals. Results from the analysis interpreted in a bioarchaeological framework inform on important questions of mortuary ritual practices and ethnic identity in prehistoric highland Andean societies.
The travel to recover data into the project was supported in part by the McClure scholarship for international study and the William M. Bass Endowment.